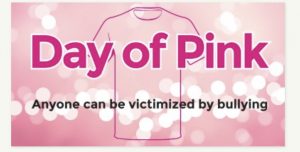 You might notice more people wearing pink on April 12 than usual. That’s because people around the world wear pink to mark the second Wednesday in April as The International Day against Bullying, Discrimination, Homophobia and Transphobia.

In communities across Canada and around the world, people are wearing pink to call for an end to bullying in all its forms, especially bullying targeting members of the LGBTTI community (lesbian, gay, bisexual, transgender, transsexual, or intersex persons).

Bullying is a serious problem in our workplaces, our schools and our communities. It’s an aggressive, persistent form of harassment that hurts people of all ages, stemming from a misuse of power to make someone else feel small and insignificant. The health fallout can be devastating, from depression and trauma to suicide in the worst cases. The ripple effects can extend to witnesses, friends, families, co-workers and even to entire organizations.

Still, people fight back. In January 2012, Christin Milloy filed a human rights complaint with the Canadian Human Rights Commission after numerous failed attempts to have her gender designation with the Social Insurance Number (SIN) program and the Social Insurance Register changed. On January 25, 2017, Milloy finally reached a landmark settlement with Employment and Social Development Canada (ESDC), the agency responsible for updating the Register.

CUPE applauds Milloy and other transgender and gender variant individuals and activists who continue to challenge bullying and systemic and institutional gender discrimination.

After years of hard work by former NDP MP Bill Siksay and current NDP MP Randall Garrison, the federal Liberal government introduced Bill C-16 in May 2016. Bill C-16 will amend the Canadian Human Rights Act to ensure that gender identity and expression are included as prohibited grounds of discrimination. The Bill will also amend the Criminal Code to make it a hate crime to target people because of their gender identity or expression. Unfortunately, as of April 2017, the Bill remains stalled in the Senate. CUPE will continue to actively push for the successful passage of this Bill – and for full legal equality for all.

The labour movement has long been at the forefront of struggles for LGBTTI rights. At CUPE’S 2015 National Convention, our members adopted resolutions to negotiate gender identity and gender expression protections into collective agreements, and to promote education and awareness about the barriers faced by LGBTTI people as they age.

On April 12, take a stand against bullying. Wear pink and encourage others to wear pink.