Below is a joint statement from the Alberta Teachers’ Association, Canadian Union of Public Employees, Unifor and the Alberta Federation of Labour.
EDMONTON – Students are now returning to school. The COVID-19 pandemic is ongoing. The Government of Alberta has a duty to ensure our schools are as safe as possible for workers, students and all their families. Ensuring safe schools ensures other Albertans aren’t put at risk.

This means the Government of Alberta must not cut corners when it comes to keeping Alberta students and families protected from COVID-19 spread in schools.

Together, we are calling for these four things from Jason Kenney’s government:

That more voices be included when the Government of Alberta brings together stakeholders to advise on the pandemic’s impact on schools. Specifically, that voices from all of the unions who represent workers in our schools be brought to the table. Consultation with school boards and superintendents is not enough. Support unions such as Unifor and CUPE must be included so that education workers, who are on the frontline fighting the spread of COVID-19 in schools, are at the table.

That representatives from Medical Officer of Health be added to this stakeholder group to share important public health information and answer questions directly.

That this stakeholder group be formalized by the government and convened on a regular basis to assess, adapt and respond to shifting needs and conditions in the fight against COVID-19 in schools.

That the Government of Alberta provide clear information and guidance on what a transition between scenarios will look like, if a transition between scenarios is needed. This would mean sharing information about what data and criteria that is being used to inform these decisions.
The government and school boards have a duty to ensure that there are adequate resources to ensure safety. That means having enough workers; enough space; enough masks and other required personal protective equipment; and enough sanitizers, soap and washing stations. That means adequately consulting and listening to those who work in our schools.

EDMONTON- CUPE Alberta President Rory Gill released the following video message after the Minister of Education refused an emergency meeting with him on behalf of 8,700 CUPE members who work in the education sector.

Gill requested the meeting as the Government of Alberta sends students and education workers back to school with no plan in place to keep them safe during the COVID-19 global pandemic.

Premier Jason Kenney is reopening schools without measures to make sure students and staff are safe. The current “plan” includes no funding for extra cleaning and sanitization, no class size caps, and no physical distancing. Kenney already laid off more than 20,000 educational assistants, custodial workers and other professionals.

CUPE Alberta is calling on Albertans to send a message to Jason Kenney and the government and demand to keep schools safe. Have your say at www.keepschoolssafe.ca.

EDMONTON – CUPE Alberta is calling on the UCP government to use newly announced federal funding to reduce class sizes across Alberta schools by hiring more teachers.

“With class sizes at current levels, it doesn’t matter what PPE students and teachers have, because physical distancing will be impossible,” said CUPE Alberta President Rory Gill. “No thanks to the UCP, the federal government has come through with extra funding for Alberta schools. We are calling on the UCP to use this money as effectively as possible by making class sizes smaller and therefore safer for students and education workers.”

Alberta will receive just over 262 million dollars from the federal government for back-to-school preparations. CUPE Alberta has repeatedly called for the UCP to take action to protect students and education workers by properly funding cleaning and sanitizations and capping class sizes.

EDMONTON – A help line launched today for parents and students is a sad and insulting replacement for the 8000 educational assistants who were helping kids adapt to learning in a quarantine.

“An educational assistant has a handful of students. They work with individual teachers on the lesson plans and implements them according to the individual needs of the student” said Gill. “Replacing that person with a help line, where someone new answers the phone each time, someone who doesn’t know the student, the lesson, the teacher or the plan, is a joke”.

“Adriana LaGrange and Jason Kenney took resources away from Alberta’s most vulnerable special needs students” said Gill. “They left them floundering and vulnerable. This help line is no help.” 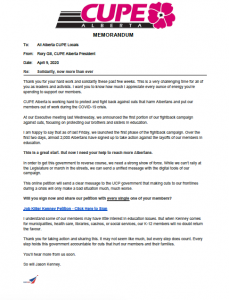 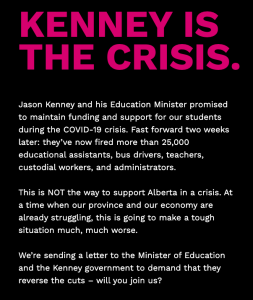 During the 2019 election, Jason Kenney promised that a UCP government would deliver jobs and economic growth. But the reality has been quite different.

We’ve already seen one budget from the UCP – built around tax cuts for large, profitable corporations and deep cuts to public spending.

As we await the release of the government’s second budget, which they’ve made clear will be ‘more of the same’, it’s fair to ask: is the UCP prescription for the economy working?

The short and unequivocal answer is “no, it’s not.”

In fact, the impact of the UCP’s first budget on Alberta can only be described as dismal.

How bad has it been? Let’s break it down.

Overall Job Loss
Despite Jason Kenney’s promises of “jobs, jobs, jobs,” Alberta has lost about 50,000 full-time jobs since the UCP was elected.

Construction Job Loss
Most of the 50,000 full-time jobs lost under the Kenney government are in the private sector, particularly in the construction sector which has lost 30,000 jobs since the election.

Kenney promised that his corporate tax cuts would bring jobs, but the opposite has happened: companies are taking the money while laying workers off, instead of hiring them.

Research conducted by the Alberta Federation of Labour shows that even senior government officials doubt that the corporate tax cuts will create any jobs at all.

For example, they’re laying off at least 5,900 Albertans who work in health care.

They’re also laying off people who regulate our oil and gas system (that shouldn’t cause any problems, right?)

Jobs are also being cut in agriculture.

And in the justice system (we thought the UCP were supposed to be big on law and order? Guess not.)

The Kenney government also promised to “make life more affordable for ordinary Albertans.” But, instead, they’re piling on new costs.

We’ve hired economists, and we think 2020 will be the year of “The Kenney Recession”, as his reckless agenda or cuts, cuts, cuts tips our province into a recession.

Clearly, the UCP aren’t the great economic managers that they claimed to be. How do they compare to the previous government, on that score? Not favourably. Under the Notley government, Alberta’s economy grew by the highest rate of any province.

And our economy was forecast to grow at one of the highest rates of all provinces in 2019.

But under Jason Kenney’s leadership, Alberta’s economic growth has slipped into “the doldrums”

Calgary and Edmonton have among the highest unemployment rates in major Canadian cities.

They can’t even balance the budget, as well as, the NDP
Oh, and did we mention that after Jason Kenney slashed revenue from large, profitable corporations that the deficit increased by $2.1 billion? It’s true…

The definition of insanity
The UCP promised jobs and economic growth.

They promised that big tax cuts for corporations and cuts to government spending would help the economy.

They promised they would balance the books without cutting services.

Clearly, it’s not working. In fact, Kenney’s cuts to government spending will put more Albertans out of work while jeopardizing our health and our children’s education.

There’s an old saying that the definition of insanity is doing the same thing over and over again and expecting different results. By this measure, we can expect the next UCP budget to be completely insane.

EDMONTON – The Alberta Federation of Labour (AFL) has released a new report that outlines troubling signs that the UCP government is considering using Albertan’s pension money to invest in oil and gas projects that are having trouble finding private investors.

The report, entitled: Don’t you dare! Why working Albertans don’t trust Jason Kenney with their retirement savings, points out that banks, global investment firms and insurance companies are all becoming more cautious about investment in oil and gas and asks the question: does it make sense to ignore the caution of the experts? The report also reviews the various changes related to pensions from Bill 22, the Reform of Agencies, Boards and Commissions and Government Enterprises Act – changes that give the government more control over Alberta’s big public-sector pension plans, which are the cornerstone of retirement security for more than 350,000 working and retired Albertans.

“Overall these changes drastically undermine the independence of public sector pensions in Alberta and introduce an unprecedented level of potential political interference,” says AFL president Gil McGowan. “It is unacceptable for the government to gamble with the pension savings of hard-working Albertans and we demand the UCP repeal the applicable sections of Bill 22 that prevent these pension plans from properly managing investments through joint governance models and pension best practices.”

McGowan also says the report conveys the message union leaders have been hearing from their members: “They’re telling us to tell Jason Kenney — don’t you dare use our retirement savings to fund your political agenda!”

The Alberta Federation of Labour represents unions with nearly 100,000 members who save for their retirements through Alberta’s largest public sector pension plans, the Local Authorities Pension Plan (LAPP) and the Public Services Pension Plan (PSPP). Those unions include the United Nurses of Alberta (UNA), the Canadian Union of Public Employees (CUPE), the Health Sciences Association of Alberta (HSAA), the International Associations of Firefighters (IAFF), the Amalgamated Transit Union (ATU), the Non-Academic Staff Association (NASA) and many others.

QUOTES:
“As Albertans, we in the provincial labour movement recognize and appreciate the huge contribution that the oil and gas sector has made, and continues to make, to our province. We are also not opposed to our pension plans investing in oil and gas projects – as long as those projects actually make sense from both a financial and environmental point of view. However, we think it would be unwise and irresponsible to use either public dollars or the retirement savings of hundreds of thousands of Albertans to do what the markets and the global investment community are increasingly reluctant to do themselves.”

“As president of our province’s largest worker advocacy group, I firmly believe that, as citizens, we need to call the Premier out on his irresponsible and misleading characterizations of the challenges facing our province. I also firmly believe that the best way to defend the jobs, wages and livelihoods of working Albertans is to prepare the future, rather than pretend, against all evidence, that we can go back to the past.”